Home Our Blog A Blue Ripple
Share this page

The 2020 presidential election was expected to result in a definitive victory for the Democratic party. Polling data made grim reading for Republicans, and indicated an insurmountable gulf existed between Joe Biden and President Trump. Therefore, an expectation of a Democratic blue wave was already established in the minds of political commentators and economic analysts alike.

However, as with previous elections over the last several years, it seems polling companies’ methodology failed to reflect voters’ intentions and the much-vaunted blue wave faded to more of a blue ripple.

Before we discuss the election results, market reaction and outlook we provide a simple overview of the US electoral system below because many find it very confusing.

The Presidency of the United States is decided under an elaborate system established under the US Constitution (23rd Amendment passed in 1961) known as the Electoral College.

Moreover, when commentators analyse the Presidential election, they also discuss the race to control majorities in the Senate and House of Representatives (House). Elections for both run concurrently; their outcomes bear a significant influence on the ability of the President to influence domestic policy and pass laws.

At the time of writing, ballot counting is incomplete in several states, and no definitive result has emerged. Both candidates have pathways to victory but, at least presently, Biden appears likely to emerge as the victor. With 264 electoral college votes apparently secure, the former Vice President needs only six more to reach the required threshold.

Trump remains close behind and could emerge with 268 electoral votes. Trump’s proximity to the threshold will probably incentivise the President to challenge the result by seeking recounts in at least one state, with the Nevadan and Georgian races the most likely targets for any Trumpian legal challenge.

While the Presidential contest remains finely balanced, Congressional races for control of both chambers of Congress -the House and Senate – have produced a much clearer result.

Overall, the Democrats are likely to retain their existing majority in the House of Representatives, albeit on a smaller majority than before after several significant losses.

Likewise, it seems the Republicans will retain their slim majority in the Senate, defying forecasts and dashing Democrat expectations of an entirely majoritarian blue legislature.

Assessment of the Outcome

While a clear winner from the Presidential race has yet to emerge, Joe Biden’s path to victory looks clearer than Donald Trump’s. However, recounts and potential legal challenges to the results in several states could prevent a resolution emerging for weeks.

One certainty produced by Tuesday’s vote is the next President, whatever his name or party, will have to contend with a divided legislature. The separation of powers and responsibilities between the Senate and House gives Congressional opposition the ability to throw sand into the machinery of government and obstruct the domestic agenda of a President.

The recent wrangling over a second stimulus package is testament to this and will likely continue at least until January’s inauguration. A bipartisan stimulus package could materialise, with each side having to compromise on their priorities. However, any attempt at sweeping legislative reform will in all probability fail, given the constraining influence of the opposing Congressional chamber.

Incremental domestic reforms are the most either candidate can hope to achieve, given the Congressional arithmetic and a lack of bipartisan cooperation.

For Biden, the feasibility of implementing crucial planks of his $3 trillion domestic economic agenda is now in doubt. Democratic plans to introduce tax hikes on corporations and higher earners, a $1.7 trillion climate initiative, boosts to tax credits and increases to the minimum wage from $7.25 to $15 are unlikely to materialise.

The graph below depicts the movements of the VIX index the vote on the 3rd of November until the 5th of November, in fifteen-minute increments. Better known as the Wall Street’s Fear Gauge, the VIX provides a snapshot of participants’ expectations of the price volatility of the headline US equity index over the next 30 days.

A VIX reading above 30 generally indicates a period of excess volatility, derived from investors fear of uncertainty and excess risk, while a value below 20 points to market stability. The graph shows in the hours leading up to Tuesday’s vote, the index to rose to around 36, indicating significant excess volatility. 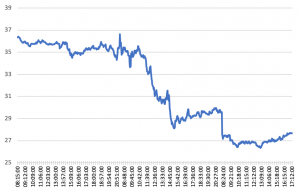 However, and despite the election returning an apparently split Congress, the index decreased to around 26 by 1pm on the 5th of November, indicating participants’ worries about prolonged political turmoil after the election receded.

Legal challenges to the presidency are likely to materialise.

With a divided Congress, Washington gridlock is likely to endure.

Markets appear to have shrugged off any prospective uncertainty.