The Five-Year Plan, and Beyond…

Home Our Blog The Five-Year Plan, and Beyond…
Share this page

This week President Xi Jinping and members of the Central Committee of the Chinese Communist Ruling Party met to set out the 14th consecutive 5-year plan to achieve key social and economic objectives. The plan will also outline goals through to 2035.

This year the timing is particularly interesting. China, approaching the end of their 13th five-year plan (2016-2020), is recovering from one of the strongest economic downturns on record. It is also just days away from the US Presidential election result, heralding the possibility of a new President in the White House.

The exact detail of China’s plan is unknown, but we can offer some insight on key aspects which fit with recent priorities. They include;

An economic growth target of 6.5% per annum, the goal of the previous plan, is high relative to developed countries. We can see from the table below the International Monetary Fund expect China to continue to close the gap in relative economic value (GDP) with the US in coming years, anticipating China to surpass by 2030. We also know growth at the current rate is hard to sustain given the large economic base which has evolved since China’s accession to the World Trade Association in 2001. Changing growth economic growth targets makes sense. History tells us that as economies mature, their rates of growth slow.

Another remarkable aspect about China is its recovery from the damaging economic effects wrought by the pandemic. Economists predict the economy will show growth for 2020; whereas other major nations will experience recessions (negative growth). This is demonstrated in the chart below. Avoiding a damaging recession puts them on a more solid footing for the next chapter of their long-term plan. 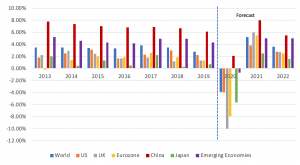 China’s approach to open trade, export expansion and more recently investment in land and maritime trade routes through One Belt One Road has turbo charged nominal GDP. However, Covid-19 and the continuation of political tensions, specifically with the US, is pointing policy towards a model known as Dual Circulation.

To achieve both aims increased investment in micro chip manufacturing and artificial intelligence will provide the next leg up, helping shift the economic model away from reliance on low cost manufacturing.

Meanwhile, Chinese leaders appear to accept relations with the US will remain difficult regardless of who wins the Presidential election on November 3rd. Planning around this aspect is central to their goals of reducing dependence on the US. This includes building trade through investment with existing partners along the Belt and the Road.

China’s role in the global economy makes its actions of significant importance for how the world moves forward. Full stop.

Unfortunately for the world at large, China’s rapid expansion has come at a high environmental cost. They have the world’s largest carbon footprint

However, there is hope this will change. Using the recovery from Covid-19 as an opportunity, the central authorities are shifting course towards a low-carbon economy.

The challenges this presents for China are significant. The chart below demonstrates their ongoing reliance on dirty energy. Coal has for many years been the key energy source and despite pressure to roll this back, investment in coal sources has continued through the One Belt One Road initiative. But a change of policy favouring a low carbon approach, together with recent investment in energy efficiency, should help reduce reliance on coal going forward.