Home Our Blog US Election Update
Share this page

There are usually three debates in the lead up to the US election on November 3rd, however President Trump’s positive testing for Covid-19 postponed the one in the middle. Last night we had the final round in Nashville. The world tuned in to listen and were left surprised by the more measured approach brought by both runners after their heated performance in Ohio.

This may have been attributable to the moderator’s ability to mute microphones to ensure equal speaking time, a useful tool with integral topics on the agenda including Race in America and National Security.

Below we draw out examples where we recognised progression in their view:

In the lead up to the debate, the polls showed Biden on route to victory, but without securing a majority in both chambers of Congress (Senate and the House). We know that historically, polls have been off the mark when the final vote is counted, but they make for interesting discussion. Book maker expectations suggest Trump has made up some ground this week, however the jaws remain wide. 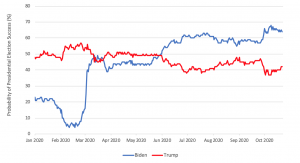 The debates take place to educate electorates on policy, but also draw out both similarities and difference in opinion.

Last month we published an article  ‘Stealing Trump’s Clothes’ . In the article, we highlighted the ‘Made in America’ policy presented by Joe Biden. We pointed to the deliberate choice of wording designed to counter Trump’s ‘America First’ slogan.

Biden and his administration chose their words carefully to deliberately disrupt and sow confusion among Trump’s voter base. By appealing directly to blue collar workers, Biden’s policy, like Trump’s, is aimed at increasing the size of the domestic manufacturing sector to stimulate job creation. By prioritising American jobs over free trade, Joe Biden is demonstrating that he is not the pure advocate of free trade that many thought.

An overlap in trade policy between Biden and Trump is where the similarities end. Outside of domestic agendas, divergences begin to widen. One of the areas this is greatest is climate change; and so-called green policies.

Trump infamously referred to climate change as a ‘hoax’ whilst Biden considers it to be a global emergency. Stark differences. Biden even used the pandemic to draw parallels between Trump’s denial of the topic with his denial of Covid-19; not Trump’s best moment on the world stage.

Trump’s actions have even exceeded his caustic words on climate issues. Since inauguration, Trump has reinforced his climate change denying credentials in a way which has galvanised his supporters. For example, he has shored up 6.8 million American workers employed within the energy space (approximately 4.6% of the workforce). In the process he has paved the way to US energy independence, seen as a great measure of success.

Chart 2.0 illustrates the benefits. Consumption of oil and petroleum fuels have ticked up (blue), but more than matched by domestic production (green); leading to a reduction in net imports (grey). What is equally impressive in Chart 3.0 is the increase in production of natural gas (orange), and the move to self-sufficiency.

The steps taken to promote the energy sector have included tax cuts, subsidies and the opening of federal land for oil and gas pipeline implementation. Simultaneously Trump withdrew commitments to global climate change agendas such as the Paris Climate Agreement to ensure maximum output.

Whilst Trump has operated to protect the carbon producing energy sources of today, Biden has his focus on the future. The trend demonstrated in chart 3.0 of renewable energy lagging as a proportion of total output is one he is determined to reverse. He wants to recommit the US to the Paris Climate Agreement and move away from the reliance on fossil fuels such as Oil, towards total clean energy production, pledging $2 trillion of infrastructure investment to support these goals. 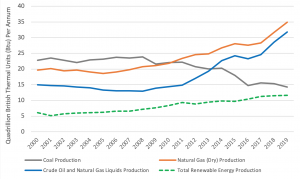 Fiscal investment and collaboration with global bodies will be the hallmarks of a Biden win. He wants to bring energy emissions from power plants to net zero by 2035, and for the US to be emission neutral by 2050. Bold targets, but they seem to be resonating with many Americans.

However, Biden is not getting it all his way. The additional fiscal spending will be largely funded through taxation, a move which isn’t popular with the electorate or business leaders. It will roll back many of the efforts made by the Trump administration to improve the playing field for US businesses competing with lower tax regimes internationally.

The Biden tax proposals include;

Raising taxation prematurely when the economy is recovering from the pandemic shock may not turn out to be a wise move by Biden. However, if the polls shown earlier turn out to be correct and Biden wins, he may do so while failing to take control of the Senate.  This will slow down his plans and may even prevent him increasing taxation.